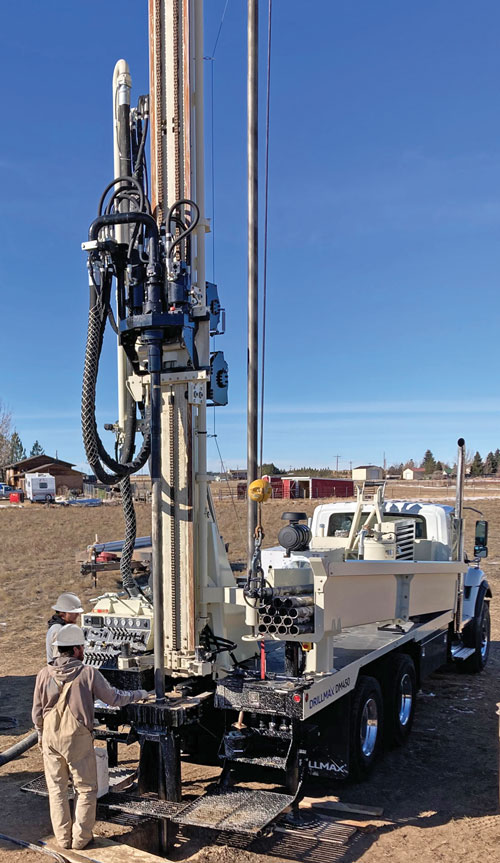 Arriving at a job site and be drilling in 20-25 minutes versus an hour, hour and a half is just one advantage of the NEW DM450.

With an affinity for big machines and a legacy of work in oil fields, Lance Gleich and brother Clayton began LG Drilling six years ago. The past couple of years brought rapid growth — from one rig to three, and from two employees to six.

“We’ve experienced success thanks to reliable employees,” Lance said. “The market is growing quickly near Interstate 25 and 80 where we’re located. Our competition is older and unwilling to put in 12-16 hour days, so that helps.”

With business booming they were ready to replace their 70-year-old rig. Having run DRILLMAX® rigs in the past, driller Wade Weaver suggested if they were going to spend the money they should check them out. Drawn to the DRILLMAX® DM450 for its simplicity, they’ve since discovered numerous other benefits.

“It’s safer with lots of hands-free capabilities so not spinning pipe by hand,” Wade said. “You’re pulling levers versus having hands on parts. It’s quieter and virtually maintenance free.”

Clayton sees this as a benefit to the operator.

“We’re not beating guys up and not beating equipment up thanks to the hydraulics and fewer moving parts,” Clayton said. “It requires less physical labor so we’re not as worn out and tired at the end of the day. It’s much safer.”

The rig’s ease and efficiency also benefit their production rate.

“The tophead drive has enabled us to cut out a full day off of well installation,” Clayton said. “It’s really efficient.”

The business boost is quickly offsetting the cost of a new rig.

“Overall we’ve had a profit jump. We took on a payment, but our increased production saves 52 days a year, which means we can drill another five to six holes per year,” Lance said.

Wade sees improvements in the new DRILLMAX® compared to the one he’d run previously completing 10 to 14-inch holes 500-feet deep for cathodic protection, doing a lot of mud rotary and air percussion.

They feel professional and confident to quickly complete the work.

“We can pull up to a job site and be drilling in 20-25 minutes versus an hour, hour and half with the older rig,” Lance said.

Clayton believes the rig will drill through anything in Wyoming.

“There’s no downtime between drilling, chasing, grouting. With the other rig it’s 20 minutes to set up for different aspects,” Clayton said.

“We can do more mountain work because we can run air percussion,” Wade said. “The top head is drill bit friendly. With the older rigs we couldn’t run certain style bits without tearing them up, but we can use them with this rig.”

Ultimately, the customer service has impressed them the most.

“With our old rig we couldn’t just call in and ask what part number I need,” Clayton said. “DRILLMAX® even has a book that lists parts. They have everything.”

Arriving at a job site and be drilling in 20-25 minutes versus an hour, hour and a half is just one advantage of the NEW DM450.